I’ve been working hard at my Italian Grandmother practice.  I’ve had some successes and some…not so successes.  I hit up my enormous backyard basil bush last night to make a pound of pesto that will make its way into something soon.  And thanks to a clearance sale on anchovies, we’re about to dive into some new territory on the fish front.

I did have a spectacular failure, though.  It was awful.  I decided I wanted to try and make Roman Artichokes.  The recipe seemed simple enough, though the process of breaking down the volleyball-sized artichokes did not.  And it wasn’t until after I had these monster ‘chokes that I realized the recipe had called for baby artichokes.

But I persisted.  I peeled these things, created a pile of compost scraps that was substantially larger than any meal that would result, and cooked them up with garlic and mint.

But whatever I did to clean them did not get ride of the needle sharp little teeth inside the heart.  I took a bite before my husband got to the table to enjoy his, and promptly started squealing.  It was like eating needles coated in lemon juice.  It was awful.  I tried to approach the artichoke from a couple other angles but all failed miserably.  Finally I decided that artichokes aren’t edible, they’re some sort of scary weed that wants to make my mouth bleed.  I gave up and all my hard work went into the trash.

There was another less-spectacular failure.  I attempted to make this pasta cake thing that was the whole reason I bought the book.  The pictures were super cool.  You sliced eggplant super thin, fried it, and then arranged it in overlapping layers around the inside of a cake pan.  Then you filled the inside with pasta, mozzarella, and a homemade tomato sauce.  Top with more eggplant, then bake.  After it’s baked, you turn it out on a stand just like a cake.  An eggplanty, pasta filled cake.  The pictures were luscious, and I couldn’t wait to make this thing.  I lovingly prepared my tomato sauce, imagining how this was going  to become my Italian Grandmother signature dish.  I was going to be making it for dinner parties for years to come, always brushing off the raging compliments with an “oh, you’re so kind!  It’s really nothing…” all while thinking “…nothing you could ever manage to make.  BWAA HA HA HA.”  But I’m a horrible person, so I have those sorts of thoughts.

Anyway, I prepare the dish, but quickly see that my CSA box did not provide enough eggplant to make the smooth overlapping layers in the picture.  No worries.  It would be held together with faith and determination!

I bake the dish, I let it cool, I turn it out.  And….SPLAT.  Faith and determination failed to hold together my masterpiece.  I scooped it up off the counter, tossed everything in a bowl, and told my husband that it was supposed to be served that way, the pictures are a lie.  I don’t think he bought it, but the end result was a delicious pasta and eggplant dish.  So no harm, no foul, right?

There have been successes.  I trussed!  I made a lamb stuffed with artichokes, mint, and pecorino cheese.  It was difficult and delicious.  I was really proud to put this one on the table. 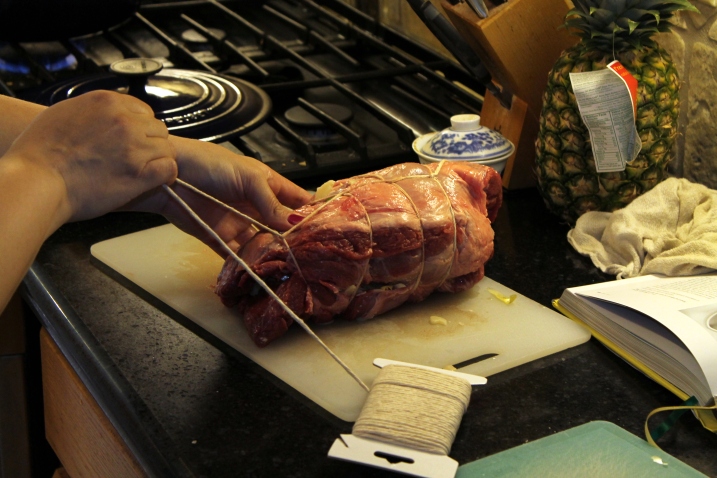 Trussing the beast for roasting!

And the result!  Served with some boiled potatoes and ciabatta.

So all in all, two steps forward, one step back on the grandmother front.  Nobody said this was going to be easy!