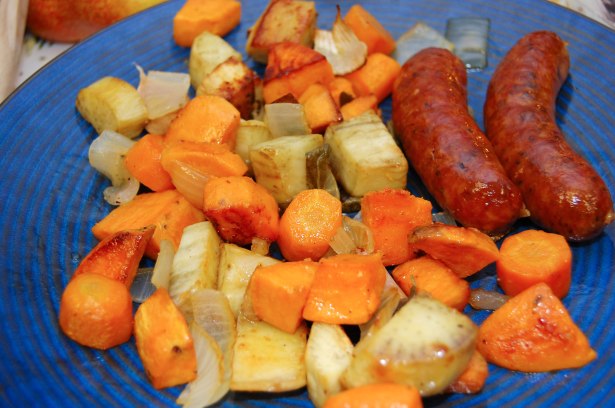 On the surface, this recipe is not so different from the other hash/roasted veggie meat combos Tiffany and I have posted in the past. But it really didn’t occur to me to cook the sausage and the veggies in the same pan until I found this recipe:  Sausages with Acorn Squash and Onions. This recipe rocks. The only improvement I would suggest is using butternut squash instead of acorn – I’ve done both and the butternut has a sweeter, richer flavor. The addition of the cheese and the dried cherries at the end is awesome.

I used this recipe as a jumping off point and found out some cool stuff on my own. Cool Stuff #1: fried sage. Dude. So delicious. Cool Stuff #2: Fully cooked sausages are less likely to dry out than raw ones.  Cool Stuff #3: Pre-tossing everything but the meat with a generous amount of olive oil = caramelized deliciousness.

So here’s my take on a sausage pan roast. Feel free, as usual, to substitute different ingredients. The great thing about sausage is it’s hard to overcook, so just make sure that your veggies have the same approximate cooking time, either by selecting veggies with similar hardness (like beets and carrots, or turnips and sweet potatoes), or changing the size of the dice depending on how long they need to cook. (Example: if you use beets and potatoes, cut the beets smaller). Also, don’t overfill your roasting pan. Make sure you can see a little bit of surface or you’ll end up with steamed instead of roasted veggies.

Make sure you can see the surface of your roasting pan peeking through!

4 cups root vegetables, peeled and chopped (for this batch I used sweet potatoes, Japanese yams, and carrots)
1/2 sweet onion, large sliced
5-10 cloves garlic, skin on
3-4 cooked sausages (I like kielbasa or andouille – higher fat pork sausages won’t dry out if you need to cook the veggies longer – if you want to use chicken or turkey sausage, stick with potatoes)
10-15 fresh sage leaves
olive oil
salt and pepper

Preheat oven to 425. Oil a large roasting pan with cooking spray. Put veggies, garlic, onion, and sage in a bowl and douse with olive oil. Don’t be shy – they should be well coated. Season to taste with salt and pepper. Place sausages on pan and scatter veggie mixture around. Make sure it’s not too tightly packed – the veggies need room to breathe if they are going to caramelize properly. Roast the whole shebang for 15-20 minutes and give the veggies a stir. Throw it back in until the veggies are lightly browned and crispy on the outside, usually another 15 minutes or so.

We usually have this with garlic bread, but it would be equally good with some brown rice. Don’t forget to squeeze the roasted garlic out on the veggies and sprinkle the now crispy fried sage on top.  If you’re feeling really decadent, add a fried egg!